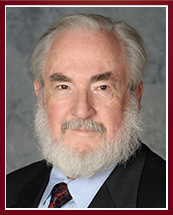 Prior to joining the firm, Mr. Kearns was a founding partner of the Kearns, Reale & Kearns law firm in Willingboro, NJ. He focuses his practice on local government, municipal land use, and business clients. He is General Counsel for the New Jersey State League of Municipalities, a Senior Trustee of the New Jersey Institute of Municipal Attorneys and a Past President of the International Municipal Lawyers Association. He is a former Chair of the Local Government Law and the Women's Rights Sections of the New Jersey State Bar Association.

Mr. Kearns is a Past President of the Burlington County Bar Association. He is a Past President and Director Emeritus for Life of the Burlington County Chamber of Commerce. During his career, he has served as the Municipal Attorney for Beverly City, Bordentown Township, Delanco Township, Edgewater Park Township, Florence Township and Willingboro Township. He has served as counsel to various other public bodies. He has held public office as a member of the Willingboro Township Council and as Mayor of Willingboro. In August, 2009 he was appointed as a member of the NJ Governor’s Task Force on Local Government Ethics. He served as Attorney for the Transition Task Force preparing for the consolidation of Princeton Borough and Princeton Township into a single municipality.