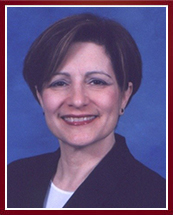 Susan Curcio, Esquire has been certified by the Supreme Court of New Jersey as a Criminal Trial Attorney and has worked as a trial attorney for more than thirty years. Since 2007, she has also taught in the graduate and under graduate programs of Montclair State’s Robert McCormick Center for Child Advocacy and Policy.

Through her private practice of law, Ms. Curcio serves as designated counsel for the NJ Public Defender, representing children accused of delinquency and the NJ Law Guardian representing abused or neglected children. She has also represented crime victims in the civil and criminal courts and adults charged with criminal offenses.

Licensed to practice law in New Jersey in December of 1976, Ms. Curcio was appointed an Assistant Atlantic County Prosecutor in January of 1977. After more than 25 years of service, she retired as a Chief Assistant Prosecutor in 2004. As a prosecutor, she worked in all areas of criminal investigation and trial but for the last 16 years with the prosecutor’s office she supervised a team of attorneys and investigators working in the Crimes against Children Unit and she tried cases of crimes against children and  she tried homicides.

While an Assistant Prosecutor, Ms. Curcio joined the protection subcommittee of the New Jersey Task Force on Child Abuse and Neglect in 1988. She co-chaired that sub-committee from 1993 to 2005. She has also been a contributing author and editor of a number of publications including: “Child Abuse, a Professional’s Guide to Identification, Reporting Investigation and Treatment. 2nd. Ed.” and “Understanding Sexual Assault and Child Sexual Abuse”.

Ms. Curcio was honored to become a member of the Atlantic County Women’s Hall of Fame as Atlantic County’s first female Assistant Prosecutor and to be included in the Press of Atlantic City’s Women of Distinction. She has also been recognized and honored by the New Jersey Child Assault Prevention Program and Mothers against Drunk Driving.

Ms. Curcio has also served on the boards of directors of professional and community organizations, including the New Jersey Bar Assn. Criminal Section, the United Way of Atlantic County, Kessler Memorial Hospital, The Sweetwater Haven Association and CASA of Atlantic and Cape May Counties.

A mother of four and grandmother of nine, Ms. Curcio and her husband reside on the banks of the Historic Mullica River in Atlantic County.