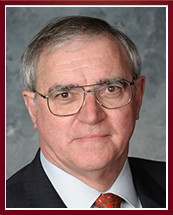 Prior to joining the firm, Mr. Reale, who prefers to be called “Skip,” was a partner with the Kearns, Reale & Kearns law firm in Willingboro, NJ. Since January 2006, Skip has focused his practice on five areas: criminal law, complex corporate litigation, land use and development, municipal government law, and alcoholic beverage law.

Skip has had what can be described as an intriguing legal career. For 27 years, Skip served as a prosecutor in New Jersey. First, as an Assistant Burlington County Prosecutor, where he served as the Chief of the Juvenile Unit, created the County’s first career criminal program, and served as a legal advisor to major crimes, arson, and financial crimes units. In 1984, Skip accepted an offer to join the New Jersey Attorney General’s Organized Crime and Racketeering Bureau. Skip spent the next 20 years investigating and prosecuting complex organized crime and corruption cases throughout New Jersey. During his career, Skip worked closely with the San Francisco Police Department’s Asian Gang Task Force and the then Royal Hong Kong Police Department’s Organized and Serious Crimes Bureau. In 2003, Skip retired and entered private practice. In 2006, he joined the law firm of Kearns, Vassallo & Kearns, which later became Kearns, Reale & Kearns, which, in turn, merged with Helmer, Conley and Kasselman in October 2015.

Skip brings a varied set of experiences to each of his practice areas. Of course, in connection with criminal law, Skip is able to draw on his 27 years of prosecutorial experience. But, one of the interesting things about Skip is his background in construction, real estate development and land use as a result of having grown up in the construction industry. (Skip has been heard explaining he spent his youth transforming South Jersey farms into bedrooms.) Not every attorney can read a set of blueprints or site plans; Skip certainly can. In 1972, Skip became the then youngest person to serve on a land use board in New Jersey when he was appointed to the Riverside Township Planning Board. In 2005, Skip was appointed to serve as a member of the Mount Holly Township Planning Board. He later spent 9 years as the Board’s attorney. More recently, Skip had an opportunity to serve as the attorney for the Palmyra Borough Planning Board. Skip brings not only his lifelong experience in construction and land use, but also a practical approach to the issues, when representing clients before zoning and planning boards.

One of the areas of Skip’s practice is the highly specialized field of alcoholic beverage law and regulation. Skip describes the state of the alcoholic beverage laws in New Jersey as “regulating a 21st Century industry, based upon social and moral philosophies dating to the 1890s with a statutory and regulatory scheme enacted in 1933 with the end of Prohibition.” Skip is a recognized expert in the field of alcoholic beverage law and has been instrumental in the development of a New Jersey League of Municipalities’ program designed to provide municipalities with strategies and options in using alcoholic beverages as one tool in community redevelopment. Skip utilizes his experience and skills on behalf of his clients, whether they are buying or selling existing retail licenses, applying for State Concessionaire Permits, or joining the exciting craft brewery industry. More importantly, Skip brings not only his expertise in connection with the State’s alcoholic beverage laws, but also his prior prosecutorial and trial experience, to the aid of retail licensees when confronting administrative disciplinary charges filed by municipalities or the New Jersey Division of Alcoholic Beverage Control.

In the field of municipal government, Skip’s prior experience in organized crime and corruption investigations gives him a unique perspective when representing local governments. He is able to identify and prevent problems for his local government clients instead of having to clean up the mess afterwards. Throughout his career, Skip has worked closely with the New Jersey Department of Community Affairs’ Bureau of Regulatory Affairs. Skip has had the opportunity to serve as a municipal attorney for the City of Beverly, as well as special litigation counsel for the Townships of Edgewater Park and Bordentown. He serves as an Associate Counsel to the NJ League of Municipalities.

Skip believes in giving back to his community. For 37 years he, his wife Gayla, and their children have called Mount Holly home. In addition to serving with the Planning Board, for 9 ½ years Skip served on the Mount Holly Board of Education, five as president. He was one of the founding members of Cub Scout Pack 80, which continues to meet at the Folwell School. He has coached Little League and served as an umpire. Skip was a member of the then Burlington County Boy Scout Council for 25 years, during which he served as the Council’s Vice President for Program for 20 years.

In his spare time, Skip can be found enjoying deep sea and fresh water fishing, photography, has been known to engage in whitewater canoeing (though he might be getting a little old), tending his flower gardens, and traveling with Gayla.