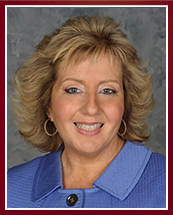 Mrs. Gerhardt served as an Assistant Prosecutor with the Monmouth County Prosecutor’s Office from 1990 to 2015. Laurie started her career as a Law Clerk in the Appellate / Motion section and was eventually promoted to Deputy Director of the Sex Crimes Child Abuse Unit and Director of the Megan’s Law Unit. She spent the majority of her career working in the Sex Crimes Child Abuse Unit.  In that capacity she was responsible for all Megan's Law matters, issues and concerns, from the initial classification of the sex offender through the final notification. She also handled all criminal violations of Megan's Law and Parole/Community Supervision for Life from the complaint stage through sentencing. Laurie worked closely with the Attorney General's Office on the implementation of the New Jersey Sex Offender Registry on the Internet. She also served as the legal supervisor for the Monmouth County S.A.R.T. /S.A.N.E. Programs. Laurie was eventually promoted to the Director of the Family Division where she trained and supervised other Assistant Prosecutors and oversaw all juvenile prosecutions and Domestic Violence Restraining Order violations throughout the County. She also supervised the Domestic Violence Weapons forfeiture unit. She was a member of the Monmouth County Domestic Violence Task force, a Member of the Attorney General’s Law Enforcement and Education Working Group, and the Monmouth County Youth Service Commission. She is also a member of the S.A.R.T. /S.A.N.E. Advisory Board Member, the Monmouth County Child Advocacy Center Advisory Board, the Monmouth County Child Abuse Task Force. Mrs. Gerhardt was recently reappointed to a three year term on  the Monmouth County Youth Services Commission by the Monmouth County Freeholders.

Since arriving at Helmer, Conley and Kasselman in 2016, Laurie has handled various Megan’s Law matters in Superior Courts throughout the state.

In addition to her legal practice Laurie is a loving dog mom to her rescue dog Bentley, who can be seen with her above.

Laurie is admitted to practice in both state and federal courts in New Jersey and has practiced law since 1990.