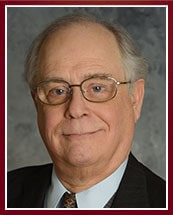 Ken graduated from the University of Pennsylvania in 1969 with a BA degree in History and received his Juris Doctor degree from Villanova University School of Law in 1972. He and his wife Kathryn reside in Woodstown, NJ and have a son and two daughters.

In 1987, he was recognized by Camden Regional Legal Services for his magnanimous support of the Private Attorney Involvement Program. He has been honored for his dedication to Pro Bono cases by the US Bankruptcy Court for the District of New Jersey and received the Legal Services of NJ-Equal Justice medal for Pro Bono Service in 1999.

Ken has handled a wide variety of legal cases in his 46 plus years of practice, from adoption to zoning. He is a Fourth Degree member of the Knights of Columbus and is past President of the Salem County Bar Association, SODAT of New Jersey, and the Salem County YMCA. He has also served as Chairperson of the District I Fee Arbitration of the Supreme Court of New Jersey and currently serves on the NJ Superior Court Judicial Performance Committee. He served as attorney for Quinton Township, the City of Salem Zoning Board of Adjustment and for the Borough of Penns Grove Planning Board. He is a former Interim Trustee for the U.S. Bankruptcy Court and spends much of his time representing both creditors and debtors in Chapter 7 and Chapter 13 bankruptcy cases.

He has an emphasis in the fields of insolvency law, Social Security disability appeals, and estate planning and is always willing to visit elderly or invalid clients at their place of residence. In his spare time, Ken enjoys photography, music and traveling with his wife and family. He devotes considerable time and effort to non-profit organizations such as the Salem County Habitat for Humanity.