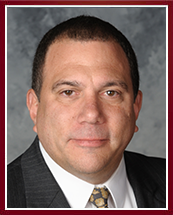 Mr. Serebnick earned his undergraduate degree from Rutgers University in 1989. In 1992, he earned his Juris Doctorate from California Western, School of Law.

In addition to representing the State as a zealous prosecutor, Barry also became an advocate for juveniles within the juvenile justice system. Barry has spoken nationally on juvenile justice and juvenile detention reform. As an Assistant Prosecutor, Governor Corzine appointed Barry to the Office of Juvenile Justice and Delinquency Prevention (OJJDP) State Committee to assist in overseeing implementation of juvenile rehabilitation programs throughout the State of New Jersey. Barry is also the recipient of the 2008 JDAI Champion Award for Monmouth County, for spearheading the Juvenile Detention Alternatives Initiative (JDAI) within the County. He is a former member of the JDAI State Steering committee which implemented and replicated JDAI throughout the State of New Jersey.

Prior to joining the firm, Mr. Serebnick was a Litigation Associate in a New Brunswick law firm where he handled all aspects of general legal practice, including commercial matters, contested family court matters and the defense of indictable criminal matters, municipal court matters and juvenile matters. He was also a municipal prosecutor in North Brunswick and East Brunswick, New Jersey.

Mr. Serebnick is admitted to practice in both state and federal courts in New Jersey and has practiced law since 1992.