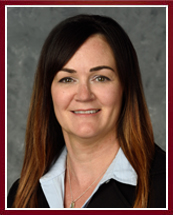 Diane has spent 23 years in public service including 19 with the Atlantic County Prosecutor’s Office.  During her distinguished career with Atlantic County, she was the first and only women appointed to serve as First Assistant Prosecutor and Acting Prosecutor.  She specialized in high profile cases including homicides, white collar crime and complex corruption and financial fraud investigations.  Diane also has extensive experience in police related matters having supervised the investigation of all police involved shootings and reviewing all internal affairs investigations for over 17 municipal police departments in Atlantic County.  She has instructed police officers in Atlantic, Ocean and Cape May counties on how to conduct and investigate internal affairs complaints.

Throughout her tenure in Atlantic County, Diane supervised various specialized units including official corruption, internal affairs, financial crimes, insurance fraud, bias crimes, fatal crash investigations, juvenile, trial and grand jury.  As First Assistant Prosecutor and Acting Prosecutor, she was responsible for the day-to-day operations of the Atlantic County Prosecutor’s Office and supervised a staff of nearly 200.  Diane has extensive experience investigating and litigating hundreds of cases and has tried a variety of cases including narcotics, official misconduct, sex crimes, weapons, assault, robbery and homicide.  She was certified as a criminal trial attorney in 2012 and recertified in 2017.  Throughout her career she has given numerous presentations and lectures in trial advocacy and was invited to be a presenter and instructor at the New Jersey Attorney General’s Advocacy Institute where she continues to train new assistant prosecutors presently.

Since becoming a member of the HCK firm in 2018, Diane has adapted her extensive prosecutorial experience into a successful criminal defense practice. She currently defends numerous clients on indictable criminal matters, juveniles matters and represents clients in domestic violence and DCP&P matters in family court.  Diane also uses her prior prosecutorial expertise to advocate for clients and their family members who have been crime victims.

Diane received dual bachelor degrees from Villanova University in 1992.  She graduated with honors from Widener University School of Law in 1995 where she was a Law Review associate editor.  After law school, she served as a law clerk to the Honorable Robert Neustadter and the Honorable Arthur Guerrera in Atlantic County Criminal Court.

Diane lives in South Jersey with her husband and three children.  She enjoys spending time with her family, particularly watching her children’s sporting activities.  She is a youth field hockey coach and an avid Villanova Basketball fan.