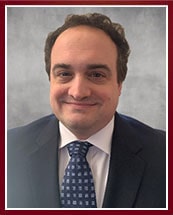 I was born on July 23, 1978 in Northeast Philadelphia, Pennsylvania. My mother is Sylvia Felici, a loving mother who has gifted me with a spirit of compassion for others, and my father is Gilbert Scutti, Esq., a trial attorney from whom I have inherited a strong ethic for discipline and hard work. Of course, my father’s work as a lawyer has made it so that the law has been in my blood naturally. Over the years, I have combined the above strengths from both my parents to become an advocate who is invested in my clients and their desire to experience success on the immigration legal front.

I grew up in the Torresdale section of Northeast Philadelphia until the age of eleven, whereupon my family moved to South Jersey, specifically Voorhees Township. While I was attending Voorhees Middle School as well as Eastern High School in Voorhees, I noticed a level of diversity that I had not encountered earlier on, and I admired the ways in which families from all over the globe had settled in South Jersey to make better lives for themselves and contribute to the ever-growing multitude of identities that the United States of America cherishes.

I then went to college first at Saint Joseph’s University and then at University Of Pennsylvania, graduating from the latter with Bachelor’s Degrees in English and Spanish. I believed while I was in college that I would go to Graduate School for English in order to pursue further my love for literature and writing, and apply those loves to teaching; I then noted, however, the way in which my father had changed lives, saved careers, and otherwise greatly helped people through his vocation in the law, and so I shifted focus to attend law school at Catholic University of America.

Recalling the great experiences shared with the diversity of people who were my peers in primary and secondary school, I decided to synthesize my Spanish communication abilities and English research and writing skills in becoming an immigration attorney. As such, I finished Catholic University in 2003 with a Juris Doctor and Certificate in Comparative and International Law. Thereafter I clerked for the Honorable Francis Montemuro of the Superior Court of Pennsylvania for one year in Philadelphia, and then continued work in the City of Brotherly Love as an Associate for my father’s own firm for over two years.

Feeling at that juncture a bit of a pull to educate, as I had originally intended in my English and Spanish concentrations in my undergraduate years, I attended The College of New Jersey where I attained my Master of Arts in English in 2009. I then spent some years freelancing in legal research and writing while adjunct teaching English and Spanish courses, then decided that the original vocation that I did commit to in the law was where I wanted to dedicate myself once more. I worked as Immigration Counselor for nearly one year at the International Institute of Akron in Akron, Ohio from 2014 to 2015; when I found an analogous position for Catholic Social Services in the Archdiocese of Philadelphia, I applied for and became Immigration Attorney there for five years between 2015 to 2020.

Presently I am joining the firm of Helmer, Conley & Kasselman and I am very excited to do so, as I seek to augment my already-extant skills in the Immigration Court in terms of advocacy in removal proceedings while benefiting the firm with the experience I have enjoyed accruing in representing immigrant clients on various fronts. I currently live in Cherry Hill, New Jersey, where I have enjoyed reading, writing, and acting in community theater. My parents and my sister have owned cockatiels in the past, and I am thinking of adopting one or two in the near future; I would just prefer to find one which has an “Off” button for when I would need quiet time.